We love the oud here at Ethnic Musical, who wouldn’t? The gorgeous tear-drop shaped body, smoothed by the no-fret structure. It is, without a doubt, beautiful. And the sound this instrument produces is no different.

Now, if you are just getting started on your journey to becoming the greatest oud player, you have to listen to the 5 best Arabic oud players of all time. Of course, “best” is always subjective but, we can guarantee that these guys are at the top of their game.

While other fantastic musicians know their way around an Arabic oud, you can’t go wrong with our 5 down below. 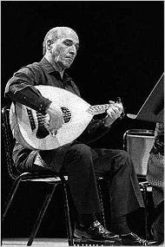 Interestingly, George Mgridichian was a clarinettist originally. However, he is the sole person praised for bringing the oud into venues such as Carnegie Hall.

His whole life was dedicated to music. He achieved both a bachelor’s and master’s degree before he made his debut in New York City. From here, Mgrdichian was offered the chance to play with the New York Philharmonic — imagine the pure elation! Amazingly, this was the first time that an oud was sharing the spotlight with a classical orchestra.

While Mgrdichian has done so many great things throughout his life, the biggest one to note (in our humble opinion) is that he brought the oud into jazz music. This might not seem so astounding but he was the first person to do it. There is no way we couldn’t keep him off our 5 best Arabic oud players list.

Having an envy-worthy name isn’t the only thing you can blame Yurdal Tokcan for! To this day, he remains at the top of the Oud Players chain.

Unlike George Mgrdichian who we just discussed, Tokcan usually performs solo. But that hasn’t stopped him acquiring some fab opportunities. In fact, he represents Turkey with his oud-playing ability in celebrations/festivals all around the globe.

While he tends to stick to traditional playing styles — we can’t blame him, they are beautiful — Tokcan does throw in some brand-new techniques. Honestly, we couldn’t replicate him if we tried! 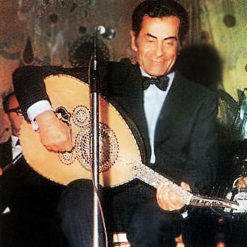 Farid El Atrache was an Egyptian/Syrian oud player and an actor. Yes, he was extremely talented (quite the one to be jealous of really).

The King of the Oud (as he was called on many occasions) had an astounding 40-year long career to his name. Within this time, he recorded countless songs (over 500, to be more specific), and developed a style that was unique to him. Typically, he featured the grounding, traditional Arabic playing style in his music.

Atrache mastered this instrument and truly knew it like the back of his hand.

Ask any oud player in the world if they know of Ara Dinkjian and they will say, “yes, obviously”. His songs are listened to on every continent. We challenge you to find an oud enthusiast who hasn’t heard at least a few of Dinkjian’s tracks.

Astonishingly, this guy’s top song (Dinata, Dinata) was played during the final act of the Athens Olympic Games in 2004. Not to mention the fact that his songs have been translated in almost every language and recorded by world-famous artists!

Dinkjian has so many notable accolades that we wouldn’t have time to talk about anyone else if we tried. But, we can’t move on to our final man without mentioning that Dinkjian was the sole founder of Night Ark. We know — he was quite the dream catcher! 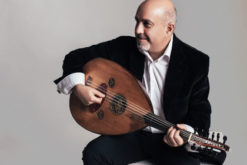 We’ve come to the last Arabic oud player on our list. Don’t fret (see what we did there?), we are finishing strong.

Not only was Naseer Shamma a world-renowned oud player, but he was also a Kurdish musician and a poet too! Fantastically, he also founded the Arabic Oud House located in Cairo.

If you were to compare Shamma’s oud playing style to the others we’ve spoken about here, you’d notice a difference. His technique and, therefore sound, has a slight tinge of uniqueness that adds to his performances.

There are so many musicians who spark the delight in us that we couldn’t get to mention. While this is sad, we know that all you passionate oud enthusiasts won’t just stop at our 5 best Arabic oud players.

Keep going, there is so much great music to discover.